The Colors of Charleston

Three hues serve as visual reminders of the lives, beliefs, and even fears that have shaped the Holy City. 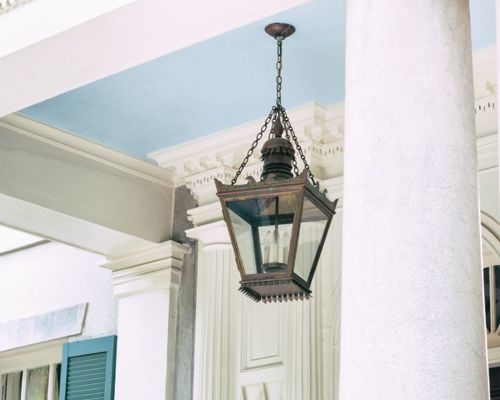 Piazzas are as ubiquitous around here as restaurants that claim they have the best grits in town. Build to provide a shaded escape from overbearing heat, these porches are also known for their ceilings, which are painted a tell-tale sky-like blue. Many do so to extend daylight and make relaxing summer evenings last just a little bit longer; others feel a true Lowcountry home isn't complete without it. Dig deeper, though, and you'll find a more eerie origin below the surface of this pretty hue, which can be found on the Links Clubhouse's porch ceiling.

Haint blue's roots lie in Western African Gullah culture. In Gullah lore, malevolent spirits known as haints couldn't cross water and would get confused by the sky. Driven by precaution and sometimes frantic desperation, the Gullah would use milk, crushed limestone, and pigment to make a primitive blue paint that mimicked the water or sky, splashing it across local porch ceilings, window frames, and other entryways in the hopes of repelling ghosts.

Lori Sawaya, a color strategist and haint blue expert, was skeptical at first. But it didn't take long for her to reverse her stance after she visited countless nineteenth-century homes to reproduce the color using authentic samples. "I've heard too many detailed ghost stories from my customers, and I've experienced it," Sawaya says. "I've felt chills, hammers have flown across the room, and mysterious orbs of light have appeared in photographs my son and I have taken of dark spaces. It's easy to see why people were reaching for a solution as simple as a paint color." 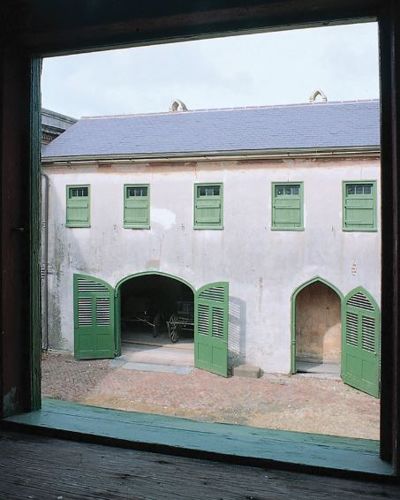 When you say the words "Charleston green," most people think almost exclusively of a dark shade more akin to coal than emerald. At its core though, the Holy City's signature sooty green was actually once a horse of a completely different color, one that years of brutal Lowcountry heat and moisture degraded beyond recognition.

That original hue was verdigris green. Made from ground bits of copper corrosion known as verdigris, the spring leaf-like pigment turned heads when it popped up on local shutters - including the heavily preserved ones at the Aiken-Rhett House - and exterior accents in the early nineteenth century. But the verdigris that made the paint so brilliant is also what made it so unstable, so much so that it took as little as five years for the elements to almost completely blacken verdigris-painted ironwork, according to University of Delaware art conservation professor and paint analysis expert Susan buck. The unique black-green color soon became a point of pride in the Lowcountry, and painters increasingly shelved verdigris in favor of a different, more stable paint that used a mix of black and green pigments to imitate darkened verdigris.

While true verdigris is rarely used today outside of the historic preservation and restoration world, the bright color's spirit does live on through a synthetic shade known as chrome green, which make a bold statement on iron work at Market Hall and private buildings on King Street. 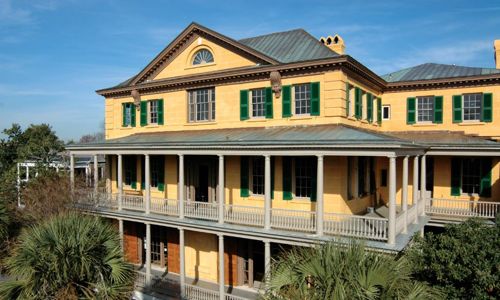 There's no better example of classic Charleston style than a wall painted with limewash, an age-old look that has lent itself to countless reinterpretations. Used by builders since the Roman Empire, limewash is a putty-like paste made from crushed limestone that requires skill to mix. It's easy to apply, though, which, along with its natural resistance to mold, helped it become the preferred finish for masonry in the Lowcountry.

Limewash also retains color better than oil-based paints, which opened the door for an unprecedented freedom of expression that turned Charleston into a bold collage of oranges, reds, pinks, and yellows. Yellow, made using an iron oxide-based ochre pigment, was among the most popular, used for everything from mansions to one-room plantation buildings.

Today, limewash is beloved for the natural wear and flaking that occurs as it breaks down over time. While heavily weathered structures were once passed over by high-end developers, in recent years, trendy restaurants and shops have raced to snap up these buildings because they lend some old-world character and charm to a fledgling venture. "The patina is a focal point," says Plantation Painters owner Rik Snyder, who restoration work on the golden yellow limewash at the William Aiken House has been imitated by numerous eateries and bars.