Become your own blacksmith through Wild Dunes Resort's Playing with Fire workshop.

Some of Charleston’s most treasured ironwork comes from Pirate’s Forge, whose founder, James Irving, has long been stoking others on the art of blacksmithing. 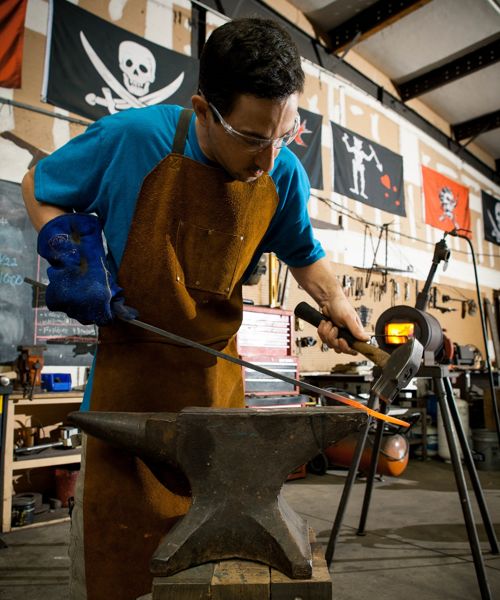 Walk by the wide-open doors of a James Island warehouse, and listen, if you will, to the sounds of a blacksmith at work: the loud whooping of the forge, the whack of a hammer against an anvil, a frowling of the grinder. Now, add in the The Rolling Stones, Led Zeppelin, and the guzzling of cold water between a boyish laugh or two, and you hear what it’s like to be James Irving, a modern day blacksmith dedicated to one of the oldest trades in the country.

“People expect someone out of Colonial Williamsburg – wearing a leather apron and a long beard, someone beaten with time and metal,” Irving says with a laugh. “Really, I think it’s refreshing to find me, someone trying to keep a craft alive that not many young people are drawn to.”

Since 2007, Irving, 33, has owned and operated Pirate’s Forge, a Charleston based business that produces handmade custom metal, from bar carts and desks to house numbers and restaurant shelving. But at the heart of this blacksmith ship is the art of the process itself – something Irving now shares with guests at Wild Dunes Resort through the Playing with Fire program, which shows guests the step-by-step process of crafting metalwork. And the story behind Irving’s teaching of the profession is just as compelling as the art form itself, which has been practiced in Charleston since the 1730s.

Irving’s blacksmithing story began three decades ago, when he noticed as a young boy that he was good at drawing and painting. He ended up pursuing studio art, then sculpture, where he was particularly fascinated with metalwork’s possibilities and tools. “Working with fire, taking something so solid, heating it up, and being able to manipulate it into art?” Irving says. “I just thought that was really cool, but I went as far with it as I could in school.”

Fresh out of the College of Charleston with a degree in studio art and a plan to work somewhere as an artist, Irving stumbled upon a Craigslist post looking for someone with a keen, artistic eye. “And it just happened to be blacksmith shop,” says Irving, who landed the job in 2005 as an apprentice and spent two years studying the craft. “I was spoon-fed the basics, cutting and grinding metal, and slowly I would get access to doing more complicated things on my own.” Working in the shop and observing really kindled his passion for pursuing blacksmithing full time.

His first big solo piece was a railing for a home in Mount Pleasant, which he had the satisfaction of seeing installed. “All my blood, sweat, and tears had gone into this,” he recalls. “It was a pretty rewarding feeling to know it would be there for a long time.”

The apprenticeship helped Irving gain the tools to start Pirate’s Forge on the back deck of his Charleston house. By 2012, he had enough demand to move into a warehouse space on James Island, where he works from early in the morning until late in the afternoon, stoking the fires, manipulating metal, and listening to rock and roll, ignoring the 100 degree days with no central air by “constantly drinking” cold water.

When Irving can’t take the heat any longer, he escapes to the beach – and to Wild Dunes Resort’s Palm Cove pool, where he has the pleasure of bringing beautiful South Carolina ironwork into rookie’s hands for two to three hour sessions. He has worked with more than 60 guests, from 8-year-olds to 80-year-olds, since he began teaching at the Resort in 2015. For each class, Irving heats metal in a portable forge, and guests then get to hammer it against the anvil into one of the four shapes – fire poker, oyster shucker, bottle opener, or iron rose – until it’s the right shape and cool enough to touch.

“They’re expecting a blacksmith class of a demonstration from the olden days, but they’re doing all the work – the hammering, the bending, the twisting of the metal – in a very controlled environment,” Irving says. Irving knows a thing or two about safety, having suffered a small piece of metal to the eye early in his blacksmithing days.

Irving finds it difficult to ever feel finished with any of his items and step away from the fire, but he says he takes a lot of pride out of watching guests finish a creation of their own. “Toward the end, I often think, ‘Maybe I could have done something differently,’ so the goal is to have something even better for next time,” he says. “I have to be okay with that – the process is always going to evolve through learning. Sometimes you can get engulfed by it.”