Locals teaming up for a change.

By: Stephanie Hunt of 5757 Palm Magazine

Along South Carolina beaches from each July through October, thousands of newly hatched sea turtles take on their first big journey. At just a few days old, the tiny loggerheads leave their nests in pursuit of the sea, guided by the natural blue and green wavelengths reflected off the ocean.

The ocean’s ancient mariners have existed since prehistoric times. Today, the seven remaining sea turtle species are telling us something – and the dedicated volunteers of Isle of Palms and beyond are listening.

Dawn’s light is soft and golden as the sun begins to peek over the tip of Wild Dunes. It’ll be hours yet before golfers tee off or kids start dragging their wagons and boogie boards to the beach. The surf seems still sleepy as well, gently lolling up on the night-washed shore.

But there are some dedicated early risers out and about – members of the IOP Turtle Team starting their morning patrol at a local pier. And you better believe they’re on a mission.

Volunteers in matching Turtle Team t-shirts with clipboards and shovels approach a spot on the beach that to most people looks like every other bit of beach up near the dune line: wisps of sea oats and lots of sand. But the red, diamond-shaped Department of Natural Resources (DNR) sign sets this spot apart. Well, that and the small miracle buried about 19 inches below it: A loggerhead turtle nest, discovered a week or so ago after Turtle Team volunteers followed the telltale tracks left by the mother’s sturdy fins as she lumbered up from the surf to dig her nest and lay her precious clutch. 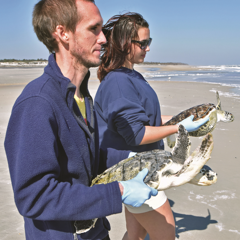 The volunteers this morning respect the magnitude of her effort and are dedicated to protecting the progeny that lies beneath. They are among an intrepid tribe: the Sullivan’s Island/Isle of Palms Turtle Team, one of 20 such trained volunteer teams that patrol some 185 miles of beach across the South Carolina coast that double as suitable habitats for nesting turtles. They look for turtle tracks that would indicate a possible new nest laid overnight and monitor existing nests to make sure no raccoons or other predators (including humans) have wreaked havoc.

The IOP Turtle Team efforts are part of the South Carolina Department of Natural Resources Marine Turtle Conservation Program, which has monitored sea turtle nests and strandings (when injured or dead turtles wash up on shore) since the late 1970s. The data gathered contributes to ongoing sea turtle nest management and protection projects on all of the state’s beaches, also incubation-central for green turtles, Kemp’s ridley turtles, and leatherbacks – all protected species – though loggerheads are by far the most common.

A sea turtle nest with its clutch of some 120 ping-pong ball-shaped eggs is nothing short of miraculous. The mother who laid it, having defied mighty odds, is one out of a thousand turtles who made it from a tiny, vulnerable hatchling to adulthood. Not only did she survive a bold middle-of-the-night trudge-flop on newborn flippers from nest to ocean without getting eaten by a ghost crab or raccoon, and then somehow powered past the crashing breakers into the vast waters where bigger, hungrier predators abound, she then, somehow, someway, managed to not get injured by a boat, caught by a fisherman, or become entangled in the ever-increasing masses of trash dumped into our oceans every year, for the 20 to 30 years it has taken her to reach reproductive age. And as if that wasn’t enough, she circumnavigated the Western Atlantic to make it back to this beach. And here, on this unassuming piece of beach, she has buried her fragile treasure.

The Isle of Palms team has some celebrity power among its numbers, thanks to best-selling author and the passionate turtle volunteer Mary Alice Monroe. Monroe became enchanted by these “ancient mariners” in 1999 while researching her novel, The Beach House, a story about a “turtle lady” named Cara Rutledge (after caretta caretta, the Latin nomenclature for loggerheads). Through her Beach House series (now expanded to five books, the last reaching #4 on the New York Times Best Sellers this past summer), Monroe has inspired legions of turtle lovers, and helped raise hundreds of thousands of dollars for sea turtle care at the South Carolina Aquarium (more on that to come). When Monroe first volunteered in 1999, there were a couple dozen Turtle Team members. Now? There are 170 on the Sullivan’s Island and Isle of Palms roster. 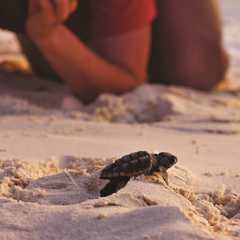 “People became captivated and wanted to help. Turtles pull at the heartstrings – you can’t watch a baby turtle hatch or an adult turtle be released back to the ocean without a sense of awe,” Monroe says. “People respond to turtles on an emotional level, and thus turtles help people understand the bigger message about protecting our oceans.”

Despite the turtles’ allure, their cute factor is just part of the motivation behind volunteering efforts and broader turtle conservation work. “Turtles have long been known as an indicator species, sort of the canary in the coal mine,” says Kelly Thorvalson, director of conservation at the South Carolina Aquarium. “They are both predator and prey, so they play an important role in the marine ecosystem and food chain. If their population is hurting and in trouble, we need to pay attention, because it means we’re at risk too. Ultimately, it’s about protecting humans as much as turtles.”

And protection is paramount. The loggerhead turtle was declared threatened and endangered along our coasts under the Federal Endangered Species Act in 1978, which means these 250- to 300-pound noble seafarers are in danger of extinction throughout all or a significant portion of their habitat range. Today the four main species that grace South Carolina shores are classified as vulnerable (loggerhead, leatherback), endangered (green turtles), or critically endangered (Kemp’s ridley). Before shrimping boats were mandated to use turtle excluder devices, much of the threat to loggerheads was in the marine environment, with turtle strandings resulting from commercial fishing practices or boat strikes. Today the largest threat may well be the turtles’ nesting environment, a result of light pollution around increasingly developed coastal areas and erosion in their nesting habitat. Turtles need dry sand beaches to nest, and dune erosion from strong storms and encroaching high tide lines resulting from sea level rise means less dry sand.

This past turtle season, Isle of Palms was home to 70 sea turtle nests, including one leatherback nest – “super exciting,” says Monroe of the rare species. But overall that’s a decline from the past two years. In 2017, there were 5,252 turtle nests in South Carolina (18.5% lower than 2016) and in 2018 only 2,765 nests along the state’s coast. SCDNR biologists are monitoring the numbers, but aren’t overly alarmed by the decline, as there’s an expected cyclical fluctuation year to year (females do not nest every year, and egg laying requires expending lots of energy, so food availability in winter can impact numbers). 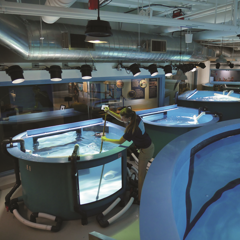 But with the surge of volunteers, like the Turtle Team, monitoring and intervention efforts have a much higher hatch success rate in recent years. In the late 1970s, more than 90 percent of nests failed to hatch, due largely to human poaching, natural predators, location (nests laid below the high tide line), and erosion; this year’s hatch success rate was 81.5 percent. A remarkable turnaround.

Nesting and hatching numbers are only part of the sea turtle story, however. In addition to monitoring nests, Turtle Team volunteers also notify DNR of sea turtle strandings – turtles that have washed up on the beach either dead, injured, or sick. Most strandings today are unfortunately mortalities, usually from boat strikes, according to the aquarium’s Thorvalson. Many live strandings are the result of “cold stunning,” when sudden drops in water temperature result in lethargy and casue these cold-blooded animals to shut down digestion. Turtles can also get tangled in trash (mostly plastics) or sick from ingesting plastics. Turtles that wash up alive get transported to the Aquarium’s sea turtle hospital, where circular tanks serve as aquatic beds for these reptilian patients.

“Their personalities begin to emerge when they start to feel better,” says Thorvalson, who has cared for the SC Aquarium’s turtles for 16 years and has seen the hospital grow from a makeshift Kmart kiddie pool into a sophisticated tertiary care facility, the only one of its kind in the state. Indeed, when the Charleston Aquarium (30 minutes away from Wild Dunes Resort) opened in 2000, there was no such thing as a sea turtle hospital. “But we were pressed into service soon after opening. There was no other place for South Carolina’s sick turtles to go, and mnay that strand are in critical condition, too sick to survive transport to another state’s facility,” says Thorvalson, who now focuses much of her time on raising awareness about plastic pollution and sea level rise, both of which are bigger conservation issues that directly impact turtle and broader marine health.

The initial hospital was a scrappy affair located in the bowels of the building, and for years operated at full capacity until a successful capital campaign allowed a $5.3 million expansion. In May 2017, the new Sea Turtle Care Center, which includes both a high-tech Sea Turtle Hospital and the Zucker Family Sea Turtle Recovery, opened its doors and tanks. Today, lucky patients like Dobby get first-class medical care and rehabilitation, and aquarium visitors get to observe as turtles get X-rays, undergo surgery, or just swim gracefully in their aquatic hospital “beds.” 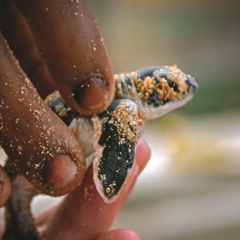 "As the reality of climate change impacts our lives and wildlife, the sea turtle, a creature not much change in 180 million years, has become a symbol of hope and endurance." - Mary Alice Monroe, Author and Turtle Volunteer

Named after the Harry Potter house elf, Dobby, a juvenile Kemp’s ridley, began his stint as a patient toward the end of July, after being hooked by a fisherman at the Myrtle Beach State Park Pier. At the Sea Turtle Hospital, Dobby’s mouth wound was treated and his condition monitored, and after two months of convalescing, he returned back to the ocean on a bright September morning – to great fanfare – joining 19 other turtles from 2018 successfully treated and healed at the Sea Turtle Care Center and happily released.

Every sea turtle release and every successful nest hatching is cause for celebration – proof that intervention and protection can help an endangered species rebound. “As the reality of climate change impacts our lives and wildlife, the sea turtle, a creature not much changed in 180 million years, has become a symbol of hope and endurance,” says author Monroe. When people ask her how they can help, Monroe encourages them to take small actions that add up. “Do one thing every day,” she says. “Recycle, pick up trash on the beach, be mindful of your use of plastic, support those committed to protecting the oceans, wildlife and landscape, support your local aquarium. And volunteer.”

The Dos and Don’ts to Help the Turtles

Small efforts can go a long way with protecting our sea turtles. Here are a few to take note of.