So You Think You Know Lowcountry Cooking?

In the Lowcountry and at Coastal Provisions, Wild Dunes Resort's signature seafood and chophouse-style restaurant, you'll find seafood in some Southern preparations you'd expect, such as the hero ingredient in some super savory boils. But you may be surprised to learn that most locals lean on a much simpler, fresher approach.

From the earliest native tribes through the colonization and plantation era, Lowcountry locals had to make do with what was around them. And with more than 500,000 acres of wetlands, salt marshes, swamps, creeks, lakes, and ponds in the Charleston area alone, it's easy to understand why proteins harvested from the water became the backbone of Lowcountry cuisine. And one of the staple ways to prepare them? Grilled.

They kept their seafood dishes simple while the fish was fresh, letting the natural flavors take center stage, with some nice caramelization on the grill. Even with oysters, which they placed on the rack just long enough for the hinges to open. But keeping fresh fish on hand was no small feat in South Carolina's intense summer heat, so that gave rise to some of the other seafood traditions popular in the area. Among them are drying shrimp, which, when added whole or in powdered form to grains and vegetables, allowed locals to impart a deep, buttery flavor to meals year-round.

One of the Lowcountry's most famous seafood dishes, Frogmore Stew, is neither frog nor stew. Named after a town, it's made by boiling shrimp, corn, sausage, and potatoes over an open fire. 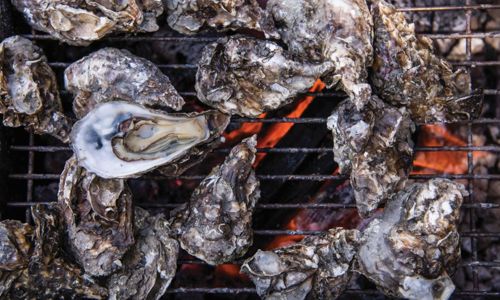 Coastal Provisions' popular grilled oysters take their cue from the 'cue, using tangy barbecue sauce and smoky bacon to infuse a little Lowcountry flair into the half shell tradition.

Combine all mustard barbecue sauce ingredients in a small saucepan. Simmer for 20 to 30 minutes, whisking occasionally. Let cool before using.

Place oysters shell down on grill. Cook until sauce starts to bubble, then remove oysters.

While grilling the oysters, heat oil in a cast-iron skillet to about 350 degrees.

Toss shallots in corn starch, and fry in oil until golden brown and crispy.