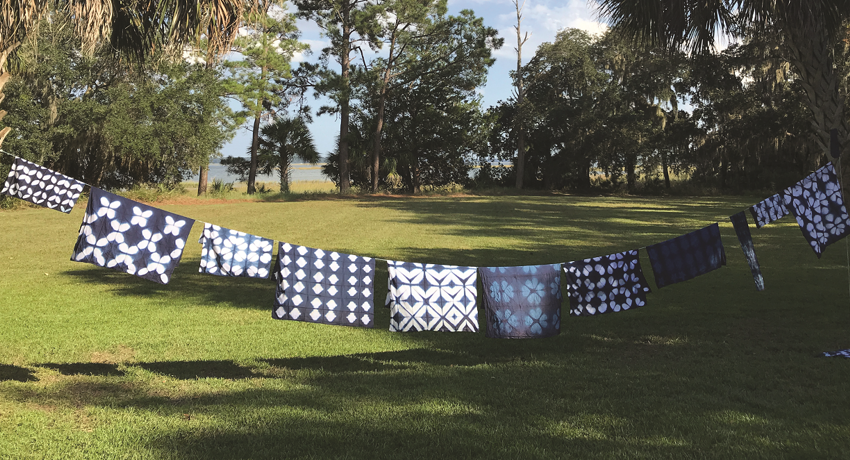 By: Erin Mahoney, from 5757 Palm Magazine 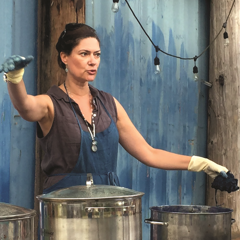 A spiritual healer once predicted that artist Caroline Harper would “make gold with her hands.” Today, Harper does just that with South Carolina’s blue gold – indigo – sharing the historic plant’s dye and a newfound technique with the Lowcountry and Wild Dunes Resort’s guests.

Today, the vivid blues and purples of indigo can be seen from just about anywhere, from bright bundles of yarn and wools to your favorite denim jeans and jackets. But the actual indigo plant that produces such vibrant dyes is in fact not so common in the US, although, it used to be. In fact, indigo made up one third of South Carolina’s exported goods in the mid-1700s, rapidly rising to one of their most profitable cash crops at the time. The imported dyes, coined as “blue gold,” were mainly used to color luxury wares of wealthy Europeans and the Old World’s elite. But when the United States declared its independence from Great Britain in 1776, the English market turned its attentions away from the former colony to India, and indigo crops all but disappeared from South Carolina’s fields. That is, until very recently, thanks to Caroline Harper.

After 25 years in an unfulfilling corporate career, educator and designer Caroline Harper became fascinated with Japanese Shibori while working at the Finleaf Gallery, a shop that showcased unique goods made by artisans in developing nations. Despite the state’s rich history with the cash crop, Harper had to travel over 7,000 miles to a silk farm outside of Tokyo to learn about the plant, where she participated in a two-week intensive study of Shibori, a traditional indigo dyeing technique similar to tie-dye, but far more intricate.

She brought that new skill home to the capital of South Carolina, Columbia, and practiced the art on designs which she sewed by hand in her shed-turned-studio. After a year of using dyes imported from Bengal, India, she partnered with two local farmers in TKtown to grow indigo and process the dye. For the past four years, Harper and the farmers have harvested the crops and hand-worked each step of the dye extraction process to create the entirely natural dye, just as it was made in its heyday.

Luckily you don’t have to book a flight to Japan to learn how to create your own indigo textile. Guests of Wild Dunes Resort can take a class with Harper right on-site. You’ll make your own non-fermented indigo dye, and while the dye develops, she walks the class through four basic methods of Shibori: fold, clamp, tie, and twist. At the end of the class, everyone gets to take home their one-of-a-kind creations from scarves to handkerchiefs. Harper hopes that these kinds of hands-on experiences will increase the popularity of this homegrown luxury good, so the vibrant blue gold can paint a new, old tradition in South Carolina again. The Dyed, Tried, and True Process

Indigo Dye Workshops at Wild Dunes Resort can be reserved for groups. All materials needed are supplied by instructor Caroline Harper. At the end of the class, each person leaves with unique pieces of art that they created from napkins and scarves.