By: Joni McNeal, from 5757 Palm Magazine

Yoga has brought celebrity guru Kathryn Budig across the globe, but the sandy shores of Charleston have given her inner peace. 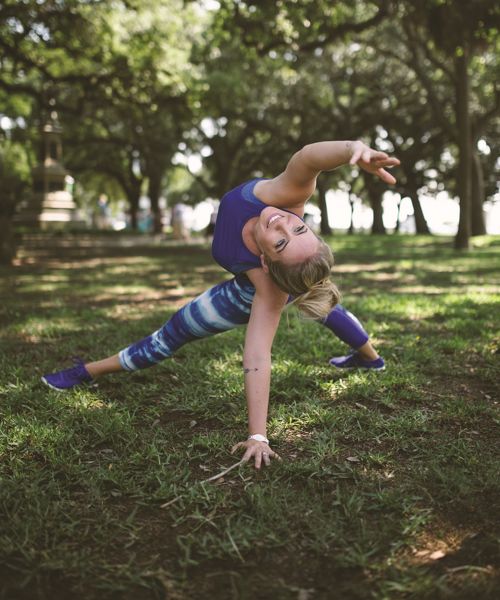 If it wasn’t love at first download dog for you, don’t worry; it wasn’t for Kathryn Budig either. While attending the University of Virginia, Budig was dragged to a local yoga studio by a fellow drama major. “It was more of an ‘ick’ moment than an ‘aha,’ moment” she remembers. “I wasn’t expecting the physical adjustments, so I was convinced the instructor was trying to get touchy-feely with me.” Still, she has never been the type to give up, and slowly an appreciation blossomed after Budig tried another studio and found an instructor and style that worked better for her.

“I’m not naturally flexible,” says the 33-year-old, who also included kickboxing, jujitsu, and karate in her fitness regimen. “But I’m very stubborn and have a strong work ethic, so I wanted to challenge myself to learn new poses and get stronger.” After bouncing around to a few different studios, she settled on ashtanga yoga – a style that synchronizes the breath with a series of postures. “Eventually, it became the highlight of my week, and I found myself scrounging together money so I could go more often,” she says.

Money was tight because Budig was pursuing an acting career in Los Angeles at the time, but she soon discovered her true passion and switched career paths after taking a yoga instructor job to pay the bills. “Yoga made me feel good about myself, and Hollywood did not,” Budig laughs. Fast forward 15 years, and her two worlds have collided: She’s a one-time cover model for Yoga Journal, contributing editor for Women’s Health, and even personal yogi to Food Network’s Giada De Laurentiis, among other notable celebrities.

Today, her enviable career allows her to pursue her passion, teach workshops all around the world, and give back via her Poses for Paws foundation – all while keeping her mind and body healthy. Yoga has brought her from Greece to New Zealand, but she plants her roots in Charleston, where she lives with her four dogs and professional skydiver husband. Here, she feels like she’s “always on vacation,” an added bonus because she originally moved to Charleston to have more of a routine and be closer to her parents, who own property at Wild Dunes Resort. “It’s important for me to come home to a home,” she says, whether that means practicing yoga at a local studio, like Charleston Power Yoga, or in her own backyard.

Her success doesn’t come without her share of body image issues, though. (She was once told that she couldn’t be a video instructor because of her “spare tire”; she published her own DVD in 2011.) “I’ve always been athletic, but I have to work hard for my flexibility and muscularity,” says Budig, who scoffs at skimpy workout clothes. “You may not be able to wash laundry on my abs, but I can hold a handstand for a long time.” She has even gone so far as to model in nothing but footwear for a ToeSox ad campaign to illustrate that health and confidence can come in all shapes and sizes.

This honest, raw message of owning your talents regardless of the rules set before you is something that was borne of her love of Greek and Roman mythology. “There was the prayer for Artemis [huntress of the moon, known as the protector of young women, strength, and female courage] with the words ‘aim true’ in it,” says Budig, who used the mantra for the title of her lifestyle book, Aim True, published in March 2016. “Whenever I’m struggling in my life, I turn to those words, set an intention for myself every day, and remind myself that it’s okay to go against the grain and challenge myself. It’s such a universal message. We’re all going through the same things, just in different ways.” Namaste, indeed.