By: Erin Mahoney, from 5757 Palm Magazine

You know the saying: bacon pairs well with just about everything. Even bourbon. Which is why the Resort’s Salty Goat Bar combined the two to shake up an old Southern classic. 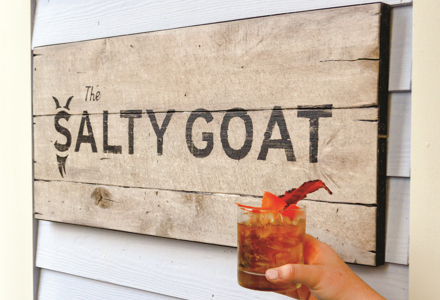 Get in the Southern spirit at home using the Salty Goat Bar’s fat-washing method.

When it came time to craft a new signature cocktail, The Salty Goat Bar’s team decided to create one focused on the delicious B&B duo – bourbon and bacon. And if those two ingredients weren’t Southern enough, bringing the two together in the iconic cocktail (first shaken up by a Louisville bartender in 1881) surely is. The Bacon Old Fashioned sees orange bitters, and a dash of sugar flirt with the fat-washed Kentucky straight bourbon to create a taste bud-tingling sip that at once is smooth, smoky, bacon-y, savory, and sweet. Each signature drink is garnished with a slice of house-made candied bacon (because who ever wanted less bacon?) that adds texture and even more flavor. You can thank us later.