Spring is a gift of reawakening in the form of ever-longer days and the urge to explore anything, anywhere. This season finds us spending less time on the couch and more time outside: walking, running, biking, gardening, or simply breathing in the fresh air we missed throughout winter. Or, at least, wishing we could. Because the truth about spring is that it’s also one of the more unpredictable seasons.


April showers are well known for a reason, and though they do often bring May flowers, they also put a damper on any outdoor adventures in the meantime. The desert in the southwestern United States doesn’t have this problem. Even though desert winters are still colder than most would expect--we’re talking pants weather--it’s true that desert climates tend to be warm year-round. Spring included.


That makes spring in the desert more a reprieve than a reawakening. It’s several precious months of warmth between the chillier winters and fiery summers that most prefer to avoid. But the ever-present blissful blue skies are only the first of many reasons why the desert should be on your list of spring destinations.

You’ll Beat the Heat -- And the Crowds


We’ve already been over desert weather in the spring. So while we won’t bore you with descriptions of crystal clear skies or long, sunny days that bode well for your suntan, we will tell you that many desert locales, like Scottsdale, expect average spring temps from the high 70s to the mid-80s. Pretty ideal, especially when you consider that by late May those temps could inch into the 100’s, sending everyone inside.


In the spring, not only will you skip over some of the desert’s worst weather, you’ll also miss the majority of the crowds. Winter is considered the high season in many top desert destinations, like Phoenix or Palm Springs, as out-of-towners seek to escape the harsher weather of their hometowns. That’s why spring, and especially the changing of the seasons as winter is on its way out, is an ideal time to head for the desert. You’ll get to escape the lingering cold in your own hometown, yet you’ll likely miss the masses who made the same choice a couple months or even weeks before you did.


Outdoor Destinations Are At Their Best

This one goes with the weather--sort of. The perpetually sunny skies make for ideal exploration, but that’s not the only reason why spring is the season for you if you’re interested in the desert’s many outdoor expeditions. Rising temps in the lowlands, like Scottsdale, means temperatures are also rising in higher elevation areas, like the Grand Canyon or Tonto National Forest.


Many don’t realize that these areas are high enough in elevation that, during the winter, ice and snow are the rule--not the exception. Come spring, these locations will have thawed, but most won’t have ventured out onto the trails just yet. In fact, summer is the high season for parks like the Grand Canyon. That’s why stopping by in the spring is the way to go. You’ll be able to reach nearly every corner of the park, but there will be fewer people to crowd the trails or foil your photo ops.

The Desert is in Bloom

Raise your hand if, when you think desert, you think sand, tumbleweeds, and creepy crawlies. You wouldn’t be the only one. And while there are plenty of earth tones in the desert, there is also endless plantlife primed to blossom come spring. Like most other plants, desert plants are at their most vibrant in the spring, and they really pop against the desert’s otherwise arid landscape.


Some of our favorites? White desert lilies, the translucent ghost flower, the vibrant desert sunflower, the golden barrel cactus, the other-worldly ocotillo, along with prickly pear cactus and desert lavender, all of which are native to the Sonoran Desert. Visit designated desert sightseeing areas, or even keep an eye out as you’re driving to other destinations on your vacation interary. Either way, you’ll be glad you witnessed the desert’s more colorful side.


Come back to life in the desert this spring. With sunny skies and the city to yourself, there’s nothing you won’t be able to see, do, or eat. And even though spring may be more than a little chilly wherever you’re from, you can guarantee that the desert’s dry heat awaits. Discover for yourself why spring truly is the best time to visit Scottsdale or any other desert destination. 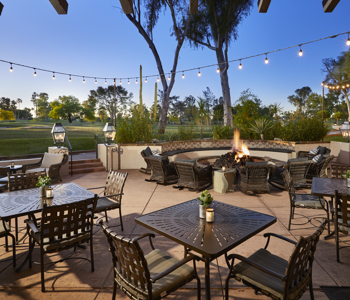 The safety and well-being of you, our guests, is and has always been our number one priority. In light of COVID-19, Hyatt is implementing new care and cleanliness standards so we'll be prepared whenever you're ready to travel again.